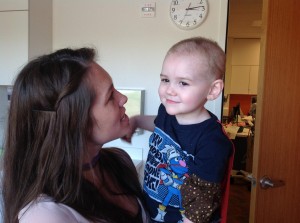 DAY +132 ~ Liam is doing good.  It has been a couple of weeks since I last updated. Things have been good. Just trying to get back to some sense of normal. Trying to manage everything, somedays are easier than others. But things are good  The heat wave was a bit much. We had to get a new AC unit, this one is big enough to cool the whole house. The units works for up to 700 sq ft., the home is 800. But does a god job, the bedrooms don’t get as cool. But it is good enough. We have appointments this week for more chimerism’s. Praying for Noa’s cells to continue to go up. Most of his labs have been good. His liver is up a little, but they said not to worry. But of course that is impossible to not to worry. I don’t know if I will every stop worrying. His GI is still doing good, except on Monday and Tuesday. He takes Sulfamethoxazole, it seems to loosen things up. Last week was a bit eventful, do you notice anything missing when you look at the photo of Liam. He was playing and somehow he caught his NG tube and it came up. All I heard Liam say is “I Puke”, when I turned around to look his tube was half way out. He was beside himself, poor little guy tried to put it back in. They haven’t put a new one back in. He has been doing good about taking his meds orally. Some days it is easier, but some days it is harder  It is like one of the medicine commercials with the little boy that runs and hides because the medicine is awful tasting. You really feel bad for him, he has had to take so many medicines for so long. Praying for the day that he is all better and doesn’t have to take any meds any more. We got the results back on his last Chimerism’s last week. They are still slowly trending up  they didn’t run all 4 tests, they just did 2.Thanks so much for all your prayers.