Liam Smith has received many donations to help in his fight against his rare genetic blood disease, but the best donation came from his older brother Hunter, on May 12,2011.Hunter gave him the gift of life saving bone marrow, which Liam received that very same day! Hunter, one of three older brothers, is 8 years old and was a perfect match for 8 month old Liam.Hunter said it was painful for a few days but that he would do it again for his little brother. 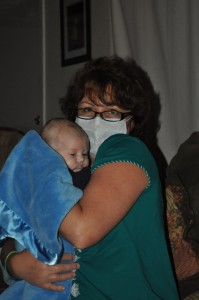 Liam was born with a HLH, Hemophagocytic Lymphohistiocytosis which presented itself at one month of age with a high fever. Typical symptoms are fever, jaundice, liver and spleen enlargement. He was transported to Emanuel Children’s hospital where he was put on life support until doctors could make the diagnosis.

He began his treatment of Chemotherapy and steroids to bring it into remission and when it came back after the first round of treatment the genetic FHLH was diagnosed.

FHLH is the primary form, where defective genes are inherited from both the mother and the father, autosomal recessive inheritance. Luckily the 3 older siblings did not inherit both genes, as did Liam.

The brothers, Noa age 9, Hunter,8 and Ryder 3 were then tested to see if they would match to be a bone marrow donor.

Hunter was an excellent match and made the brave decision to help his little brother.

Currently the Jared, Kristy and Liam are living in the Seattle Children’s Hospital for the 0-100 days after transplant. Then Liam can move to the Ronald McDonald House in Seattle, with the family during the rest of his treatment as an outpatient.

The family wishes to thank the Woodland Community and everyone who has blessed them with all the love, prayers and financial support during this journey.